Guangzhou is the old city of Canton, for 800 years the centre of contact between the East and West in the South China Seas. Thence came Western traders eager to buy Chinese silks and tea and from there left the early immigrants who settled in Singapore and California — called by the Cantonese The Gold Mountain. Others settled in Limehouse in London and opened the first Chinese eating houses in the UK, the ancestors of the modern Chinese restaurants.

Canton, the principal city of the province of Guangdong, is at the head of the Pearl River Estuary while the island of Hong Kong lies at the mouth of the same estuary. Guangdong is a rich farming land with paddy fields shining in the morning sun, waterways alive with ducks and lined with orchards of sub-tropical fruits. Everywhere there is growth and abundance. Northern Guangdong is ringed with mountains at whose feet lie orange groves and tea gardens, while the long coast line is dotted with bays and tiny coves where turtles come to lay their eggs, and shellfish and shrimps are plentiful. Farmers tend small plots of green vegetables which are ready for harvesting within two months of being sown, while others raise fish in great fresh water tanks.

In Guangdong live not only Cantonese speaking people but also Hakka and Chaozhou people speaking their own forms of Chinese and having their own culture. Each group has contributed to the renown of Cantonese cooking. The Cantonese themselves cook their foods quickly using peanut oil to give it a characteristic flavour and including fresh vegetables in many of their dishes. They season their foods with soy, sesame, sugar, vinegar and chillies. Hakka people who live on the East river, steam many of their dishes. Their food is more oily, more slowly cooked and often more highly seasoned than the dishes of the Cantonese themselves. Chaozhou people live near the coast, and traditionally, many of them spend much of their lives with their families at sea, fishing. Fish, seafood, salted and preserved foods all play a large part in their cooking which is often sweeter and more highly decorated than other southern people’s. They frequently use fruit as well as vegetables in a dish.

The cooking of a community mirrors the variety and quality of its produce, and in Guangdong there is a wealth of fresh foods available. The ducks and chickens and even the fish arrive live at the markets to be cooked at the peak of freshness. Small fishing boats in Hong Kong sell freshly caught live crabs, while other fishermen gather oysters from the beds in the shallow bays. Everywhere this food is transformed into miraculous dishes cooked in a moment, still full of their natural flavours, and seasoned to bring out their richness. Such is the background to Cantonese cooking.

It is quite possible to recreate many Cantonese dishes in our own kitchens in the West, since the sauces and flavourings are widely available in both Chinese and Western supermarkets. Judicious shopping for the very freshest vegetables and fish, fresh chickens and flavoursome pork, although not necessarily the most expensive cuts, yields great returns.

The basic method of Cantonese cooking is stir-frying. Foods for stir- frying are cut into thin slices or strips and cooked very quickly over a high heat in a little oil so that the outside of the food is sealed while the inside remains moist. A Cantonese chef using a wok holds it over a searing heat, raising or lowering the pan with one hand to control the temperature while keeping the food constantly on the move using a flat scoop in the other hand.

A true stir-fried dish has no gravy when it is finished and only a light final seasoning of soy, sugar or sak. It is dependent for its results on split-second timing, and should be eaten immediately it is cooked.

Bigger pieces of meat, including chicken pieces with bones, requiring longer cooking are stir-fried and then braised for a few minutes in a sauce to finish their cooking. Braised dishes do not require....... 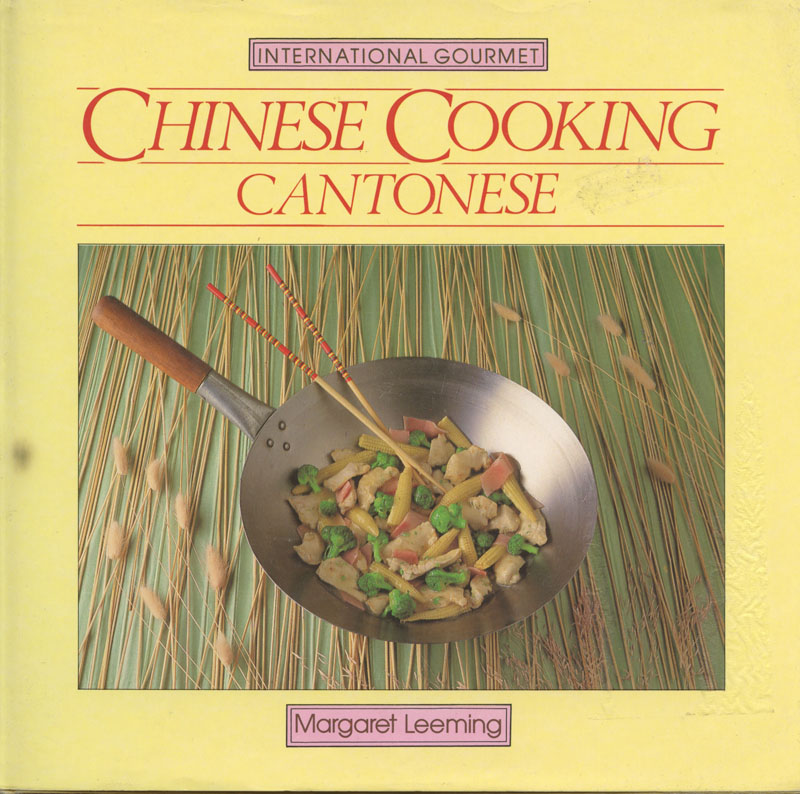 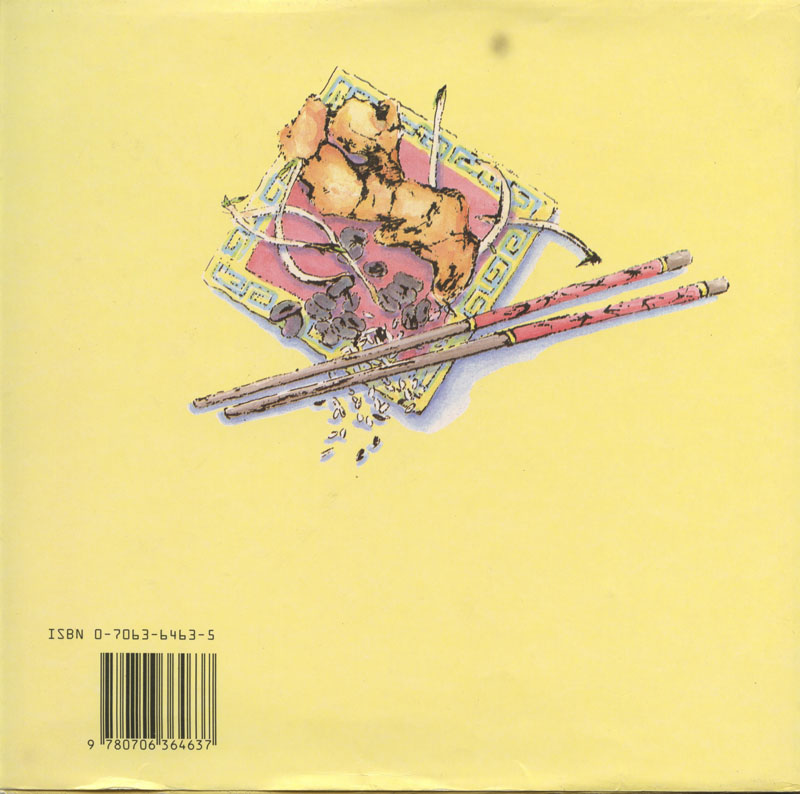 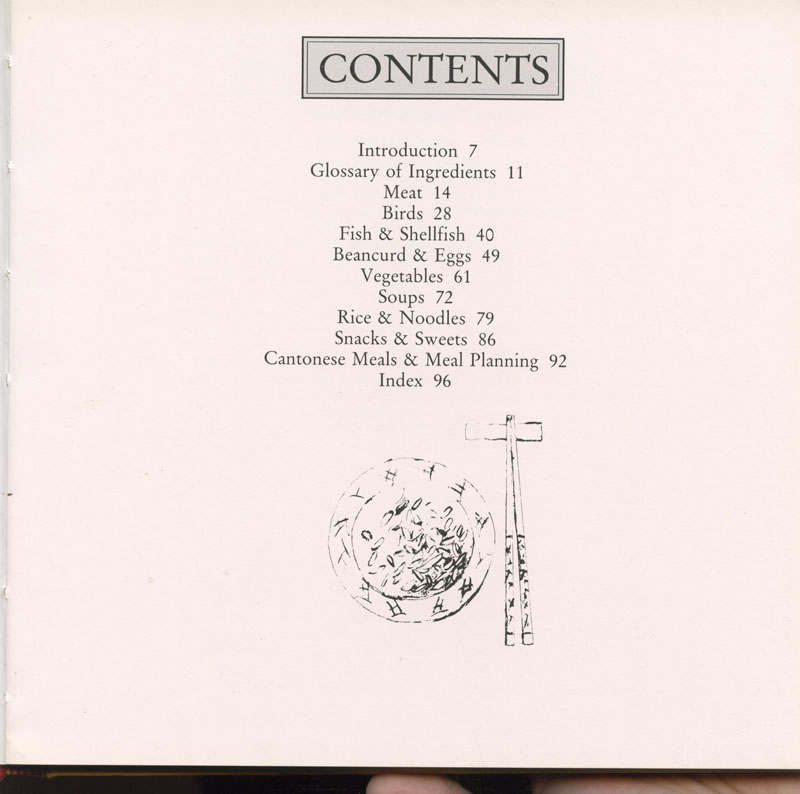 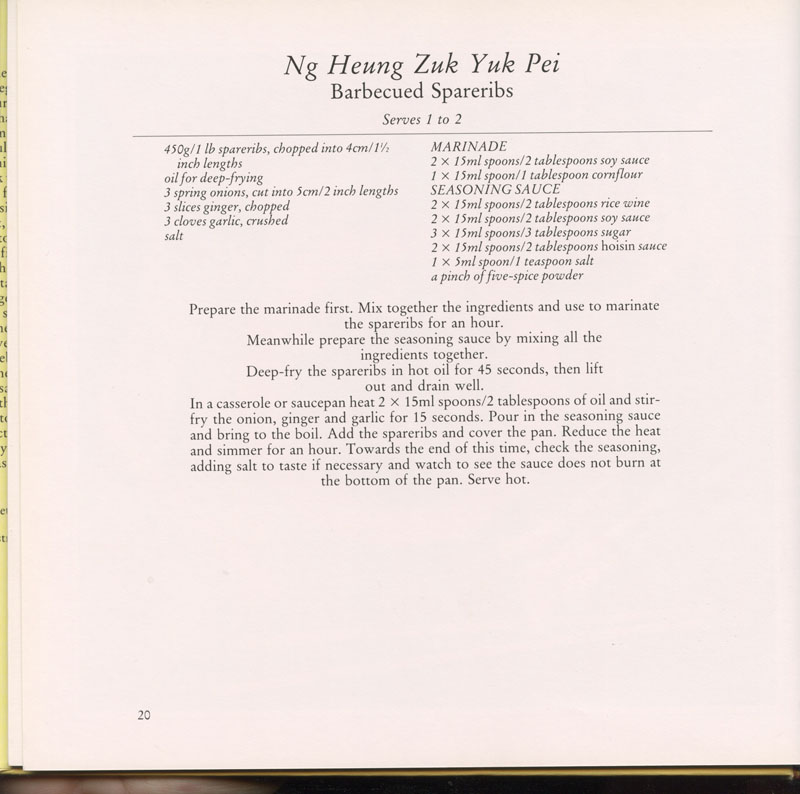