In 1994 I moved to the Sichuanese capital, Chengdu, to take up a British Council Scholarship at Sichuan University. It wasn’t my first visit to the province, and I have to admit that my choice of university was heavily influenced by Sichuan’s gastronomic reputation. On two previous trips to the region I had been bowled over by the rich flavors and warm colors of the local food, and I knew I wanted to find out more about it. When I’d been in Chengdu for a couple of months, sampling the street snacks and the folk cuisine, drinking in the colors of the open markets, I decided with a German friend to make inquiries about cooking classes. One sunny October afternoon we cycled across the city in search of the famous provincial cooking school.

We could hear from the street that we had arrived. Fast, regular chopping, the sound of cleavers on wood. Upstairs, in a plain white room, dozens of apprentice cooks in white overalls were engrossed in learning the art of sauces. Chiles and fresh ginger were being pulverized with pairs of cleavers on wooden cutting boards, Sichuan peppercorns ground to a fine brown powder, and the students scurried around mixing oils and spices, fine-tuning the flavors of the rich dark liquids in their crucibles. The air hummed with a gentle rhythmic pounding, the sound of china spoons in china bowls. On long parallel tables sat bowls of ingredients; pools of soy sauce and oil, piles of sugar and salt. Notebooks scribbled with Chinese characters lay around on the tables amid the blood-red chiles and scattered peppercorns. The light streamed in through open windows. We decided immediately that this was where we had to study.

My friend Volker and I took private classes at the Sichuan Institute of Higher Cuisine over the next two months. Our teacher was the brilliant Gan Guojian, and the school’s English tutor. Professor Feng Quanxin, was at hand to help us decipher the Sichuan dialect and explain the unfamiliar culinary terms. With this foundation, and a knowledge of a small repertoire of classic Sichuan dishes, I was able to talk to chefs and restaurateurs, and to spend fascinating days of study in several local restaurants.land of plenty

Some months later, when I had finished my course at Sichuan University and was thinking about returning home to England, I dropped in at the cooking school to say hello.To my surprise, the principal of the school invited me to enroll as a regular student in a professional training course.This was a particular privilege, as no foreigner had ever done this before. Naturally I leapt at the opportunity, enrolled and paid my modest fees, and was promptly issued my own chef’s overalls and Chinese cleaver.

For the next three months I studied cooking every day with forty-five young Sichuanese men and two young women. Mornings were spent in the classroom studying cooking theory—the selection of raw ingredients, the mixing of flavors, the control of the temperature of the fire and oil, and the different cooking methods—and then we would all move over to the demonstration room. There, we would gather around to watch our teachers, Long Qingrong and Lu Maoguo, prepare examples of home cooking and banquet delicacies with ease and artistry. The highlight of the morning was always, inevitably, the sampling. In the afternoons it was our turn to try. In teams of ten we prepared our raw ingredients, killing and cleaning fish, washing and chopping vegetables, collecting dried spices and pickled chiles from the nearby storeroom. Then each of us would have a turn at the wok, our classmates gathering around to tease and criticize.The finished dishes were all presented to the teacher, who would assess them for color, taste, and texture.

Once a week we studied pastry-making with the famous pastry chef Li Daiquan. Mr. Li acquired his skills as an apprentice to one of the great Sichuanese chefs of the twentieth century, Kong Daosheng, and his “rippled- silk fried dumplings” (bo si you gao) are celebrated all over the province. From him we learned to make different kinds of dumpling wrappers; to prepare stuffings sweet and savory; to fold, pinch, and tuck; and to steam, fry, and boil all kinds of mouthwatering snacks.

On my days off I would cycle around Chengdu, learning about street food and researching raw ingredients. I was also lucky enough to be allowed to study in the kitchens of several restaurants, including the traditional snack specialist Long Chao Shou and the magical Shufeng restaurant. Exploring Chengdu was a never-ending pleasure. I recall sitting with an old roast duck vendor in a narrow back street that meandered among the wooden courtyard houses in the center of town, discussing the food of the past and watching the life of the teeming city flow by. Fruit vendors passed, bearing bamboo baskets laden with cherries or “dragon-eye” fruit dangling from either end of their bamboo shoulder poles. A sharp metal clink heralded the arrival of the knife sharpener, bearing two cleaver blades and a pair of round-handled Chinese scissors.

In the quieter alleys, home-cured bacon and sausages hung from the eaves in midwinter; in summer they were decked with pieces of radish, citrus peel, and cabbage hung out to dry. Someone would be tinkering with a bicycle, a group of old people playing mahjong on a makeshift table, clattering the tiles. Dried foods would lie soaking in preparation for an evening meal; somewhere a pot would be bubbling away on a charcoal burner. Brightly colored clothes hung on lines crisscrossing the lanes. Elderly people sat back in bamboo chairs, watching their grandchildren play.

Since those first days, I have returned to Chengdu every year, sometimes for months at a time, to continue my research and to collect more recipes. Each visit has opened up new paths of culinary exploration, and I never cease to be amazed by the diversity and dynamism of Sichuanese cuisine.

Since I began my research, I have entertained countless friends and relatives with Sichuanese meals, and the reception has often been ecstatic. These dishes are simply so different from any Chinese food most people have tasted. They may have eaten Chinese dumplings before, but they’ve never had Sichuan’s famous Zhong dumplings, with their delicious sweet, salty, spicy, garlicky sauce. They’ve eaten stir-fried dishes, but never a cold cucumber stir-fry with the merest, tantalizing rumor of spice and sesame. And they think they know what bean curd tastes like, but they’ve never tasted real ma po dou fu, with its fiery red sauce and scattering of ground beef and dark, leafy greens.

Sichuanese cuisine ranges from street snacks to banquet cooking, its ingredients from seasonal vegetables to rare delicacies. A few of the recipes in this book require unusual materials or complex cooking methods; most do not. All of them have been tested in my London kitchen, on an ordinary gas stove, with ingredients that are locally available. I have tried to offer a glimpse of the diversity and sophistication of Sichuanese cuisine, but the emphasis of this collection of recipes is firmly on the folk cooking of the region, on the wonderful dishes that my Sichuanese friends make at home or in their restaurants, and that I lived on, with great delight, for more than two years of my life. 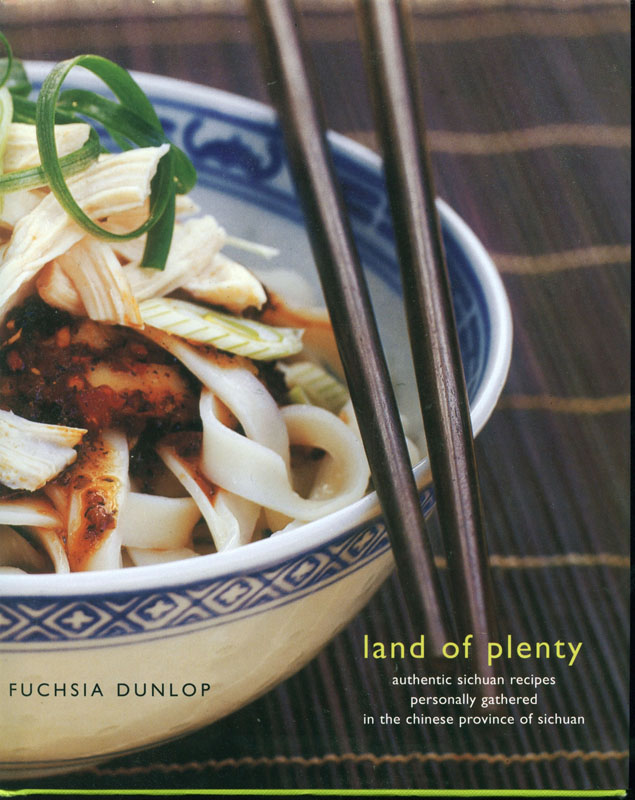 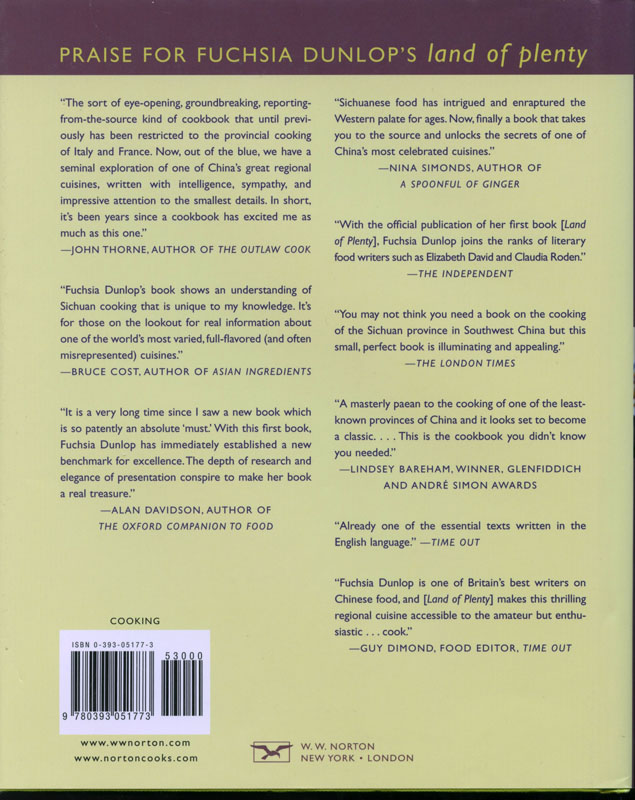 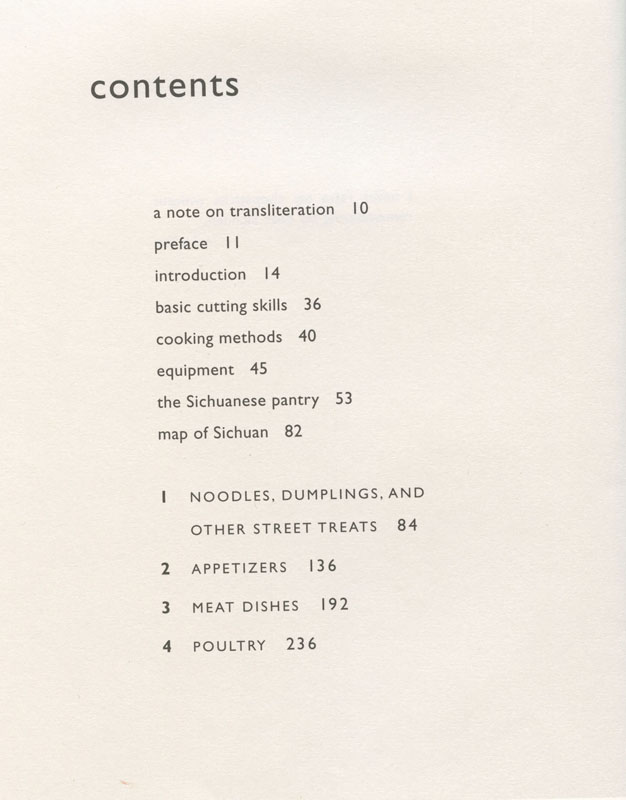 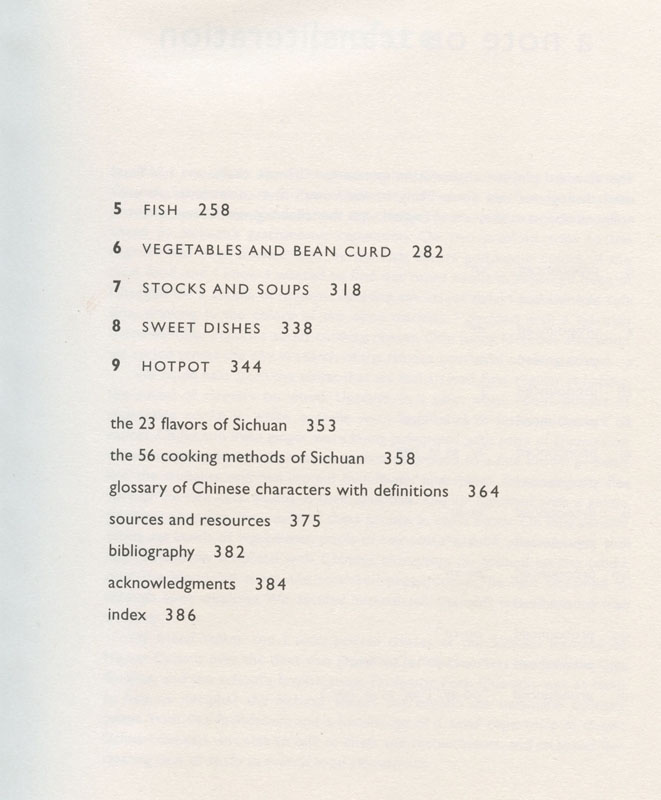 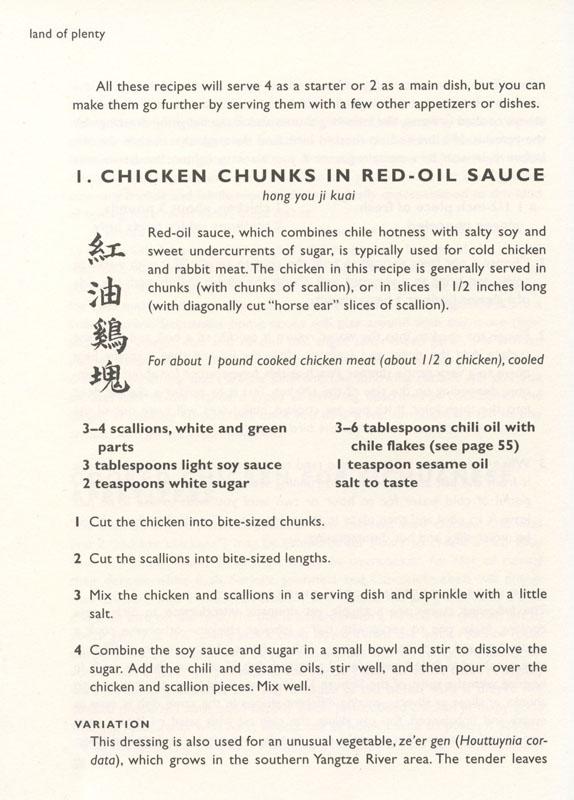 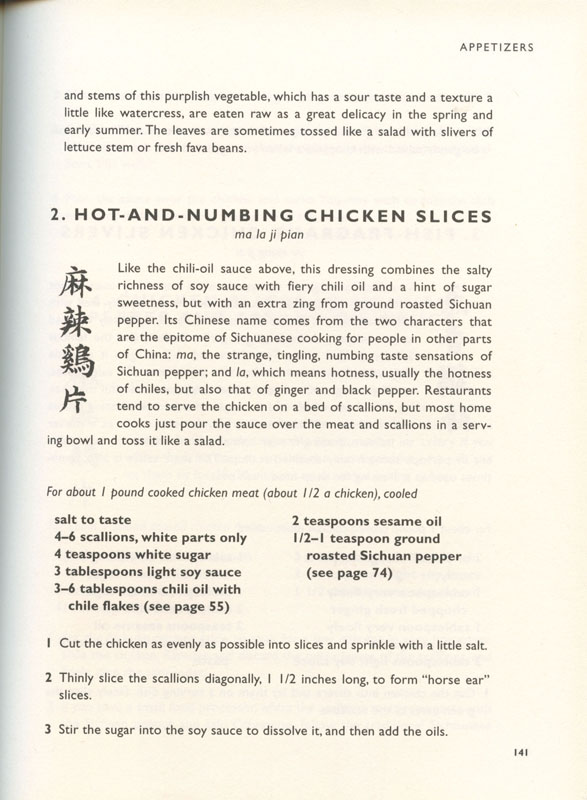