The Every Grain of Rice

The Chinese know, perhaps better than anyone else, how to eat. I'm not talking here about their exquisite haute cuisine, or their ancient tradition of gastronomy. I’m talking about the ability of ordinary Chinese home cooks to transform humble and largely vegetarian ingredients into wonderful delicacies, and to eat in a way that not only delights the senses, but also makes sense in terms of health, economy and the environment.

Not long ago I was invited to lunch in a farmhouse near Hangzhou, in eastern China. In the dining room, the grandmother of the household, Mao Cailian, had laid out a selection of dishes on a tall, square table. There were whole salted duck eggs, hard-boiled and served in their shells, fresh green soy beans stir-fried with preserved mustard greens, chunks of winter melon braised in soy sauce, potato slivers with spring onion, slices of cured pig’s ear, tiny fried fish, the freshest little greens with shiitake mushrooms, stir-fried eggs with spring onions, purple amaranth with garlic, green bell pepper with strips of tofu, and steamed eggs with a little ground pork, all served with plain steamed rice. Most of the vegetables on the table were home-grown and the hen’s eggs came from birds that pecked around in the yard.

I'll never forget that meal, not only because it was one of the most memorably delicious that I have had in China, but also because it was typical of a kind of Chinese cooking that has always impressed me. The ingredients were ordinary, inexpensive and simply cooked and there was very little meat or fish among the vegetables, and yet the flavors were so bright and beautiful. Everything tasted fresh and of itself. Mrs. Mao had laid on more dishes than usual, because she was entertaining guests, but in other respects our lunch was typical of the meals shared by families across southern China.

European visitors to China since the time of Marco Polo have been struck by the wealth of produce on sale in the country’s markets: fresh fish and pork, chickens and other birds, exquisite hams and an abundance of vegetables.

The rich variety of ingredients, especially vegetables, in the Chinese diet is still striking.

I remember researching an article about school dinners in China in the wake of Jamie Oliver’s campaign to improve them in Britain. I came across a group of children at a Chengdu state school lunching, as they did every day, on a selection of dishes made from five or six different vegetables, rice and a little meat, all freshly cooked and extremely appetizing.

More recently, walking around the streets of Beijing,

I couldn't help noticing the extraordinarily healthy lunches being eaten by a team of builders outside a construction site. They were choosing from about a dozen freshly cooked dishes made from a stunning assortment of colorful vegetables, flavored, in some cases, with small amounts of meat, and eating them with bowls of steamed rice.

Across the country, a vast range of plant foods are used in cooking. There are native vegetables such as taro and bamboo shoots; imports that came in along the old silk routes from Central Asia such as cucumber and sesame seeds; chillies, corn, potatoes and other New World crops that began to arrive in the late sixteenth century; and more recent arrivals such as asparagus that have become popular in China only in the last few decades. And aside from the major food crops, there are countless local and seasonal varieties that are little-known abroad, such as the Malabar spinach of Sichuan, a slippery leaf vegetable used in soups; the spring rape shoots of Hunan which make a heavenly stir- fry; and the Indian aster leaves that are blanched, chopped, then eaten with a small amount of tofu as an appetizer in Shanghai and the east of China.

Of course, food customs are changing as fast as everything else in China. In the cities, people are eating more meat and fish, dining out more frequently and falling for the lure of Western fast food. Rates of obesity, diabetes and cancer are rising fast. Younger people are forgetting how to cook and I wonder how some of them will manage when their parents are no longer around to provide meals for the family.

The older generation and those living in the countryside, however, still know how to cook as their parents did. They use meat to lend flavor to other ingredients rather than making it the center of the feast; serve fish on special occasions rather than every day; and make vegetables taste so marvellous that you crave them at every meal. It is interesting to see how modern dietary advice often echoes the age- old precepts of the Chinese table: eat plenty of grains and vegetables and not much meat, reduce consumption of animal fats and eat very little sugar. In our current times of straitened economies, overeating and anxiety about future food supplies, traditional Chinese culinary practices could be an example for everyone.

In the past, of course, it was economic necessity that limited the role of meat in the Chinese diet, but, coupled with the eternal Chinese preoccupation with eating well, this habit of frugality has encouraged Chinese cooks to become adept at creating magnificent flavors with largely vegetarian ingredients.

a small quantity of meat is usually cut up into tiny pieces, adding its savoriness to a whole wokful of vegetables; while dried and fermented foods such as soy sauce, black beans and salt-preserved or pickled vegetables—seasonings I’ve come to think of as magic ingredients—bring an almost meaty intensity of flavor to vegetarian dishes.

One of the richest aspects of Chinese culture, arguably, is the way so many people know how to eat for health and happiness, varying their diets according to the weather and the seasons, adjusting them in the light of any symptoms of imbalance or sickness and making the most nutritious foods taste so desirable; and yet in China, people generally see this wealth of knowledge as unremarkable. I’ve lost count of the number of times that Chinese chefs and domestic cooks have told me of their admiration for the “scientific” approach of Western nutrition, without seeming to notice how confused most Westerners are about what to eat, or to consider how much the time- tested Chinese dietary system might have to offer the world.

Chinese cooking has something of a reputation in the West for being complicated and intimidating. It’s true that banquet cooking can be complex and time-consuming, but home cooking is generally straightforward, as I hope this book will show. Keep a few basic Chinese seasonings in your larder and you can rustle up a delicious meal from what appear just to be odds and ends. Not long ago, I invited a

friend back for supper on the spur of the moment and had to conjure a meal out of what felt like nothing. I stir-fried half a cabbage with dried shrimps, and leftover spinach with fermented tofu; made a quick twice-cooked pork with a few slices of meat I had in the freezer; and steamed some rice. The friend in question is still talking about the meal. Cooking a few bits and pieces separately, with different seasonings, made a small amount of food seem exciting and plentiful.

The recipes in this book are a tribute to China’s rich tradition of frugal, healthy and delicious home cooking. They include meat, poultry and fish dishes, but this is primarily a book about how to make vegetables taste divine with very little expense or effort, and how to make a little meat go a long way. Vegetables play the leading role in most of the recipes: out of nearly 150 main recipes, more than two-thirds are either completely vegetarian or can be adapted to be so, if you choose. Some of the recipes call for more unusual Chinese vegetables that may require a trip to a Chinese or Asian supermarket, but many others demand only fresh ingredients widely available in the West.

I have avoided complicated recipes that are more suited to restaurants than home cooking, as well as deep-frying, with a few delicious exceptions.

A large number of recipes come from the places I know best: Sichuan, Hunan and the southern Yangtze region. (Cooks from Sichuan, my first love in terms of Chinese food, are particularly skilled at creating cheap, simple dishes that are extravagantly savory.)

Other recipes  are from Hong Kong, Guangdong, Fujian and other regions that I’ve visited. There is a definite southern bias in the selection, partly because I’ve spent most time in southern China and partly because southerners, with the diversity of fresh produce available to them all year round, have the most varied and exciting ways with vegetables. I’ve included some simplified versions of classic recipes from my previous books, and a few unmissable favorites in their original forms.

Chinese home cooking is not about a rigid set of recipes, but an approach to cooking and eating that can be adapted to almost any place or circumstance, so I hope that this book will serve as a collection of inspiring suggestions as much as a manual. Many of the cooking methods and flavoring techniques can be applied to a wide range of ingredients.

I've made suggestions for alternatives in many recipes, but feel free to use your imagination and improvise with whatever you can find in your fridge or cupboard. And although I've tested all the recipes with precise amounts of ingredients and seasonings, many are so simple that quantities are not critical: you can add a little more or less of this and that as you please, once you have become familiar with the basic techniques.

The flavors of some of the simplest recipes in this book will amaze you, I hope, as they still amaze me. Just try Blanched Choy Sum with Sizzling Oil, a dish that takes only 15 minutes to make but is beautiful enough to launch ships, or the Sichuanese sauces for cold chicken, which will transform the way you view leftovers from your Sunday roast or Christmas turkey.

Spinach cooked with garlic, chilli and fermented tofu tastes exquisite and is so much more than the sum of its parts.

Often, when I cook these dishes, I wonder at the alchemy of it, how such basic techniques can provoke such mesmerizing sensations of flavor.

This book, then, is a collection of recipes and basic Chinese kitchen techniques that I have found to be an inspiration in my own home cooking. I hope I you’ll find them inspiring too.                 I 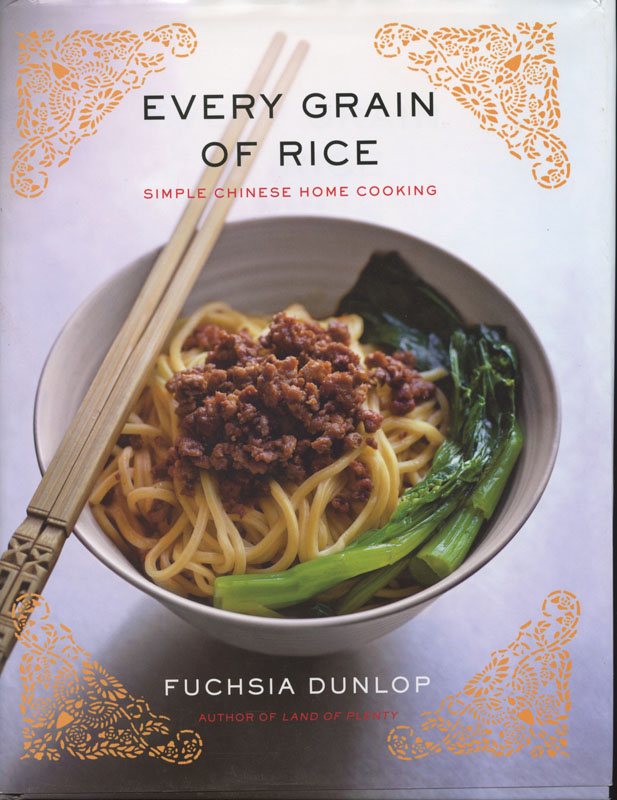 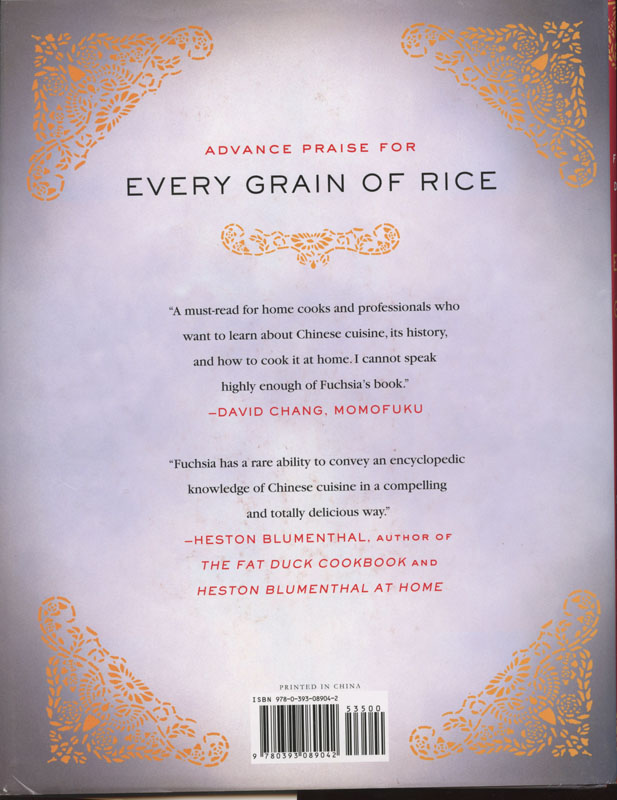 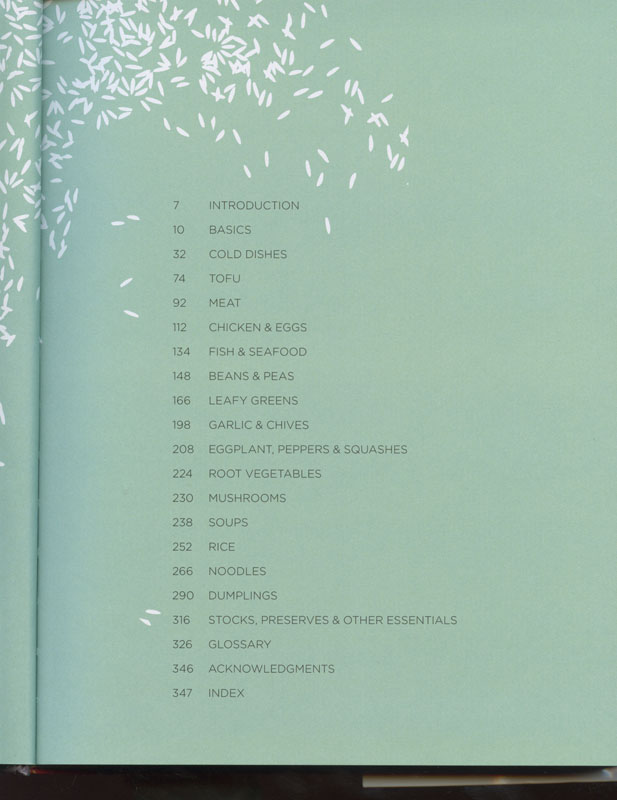 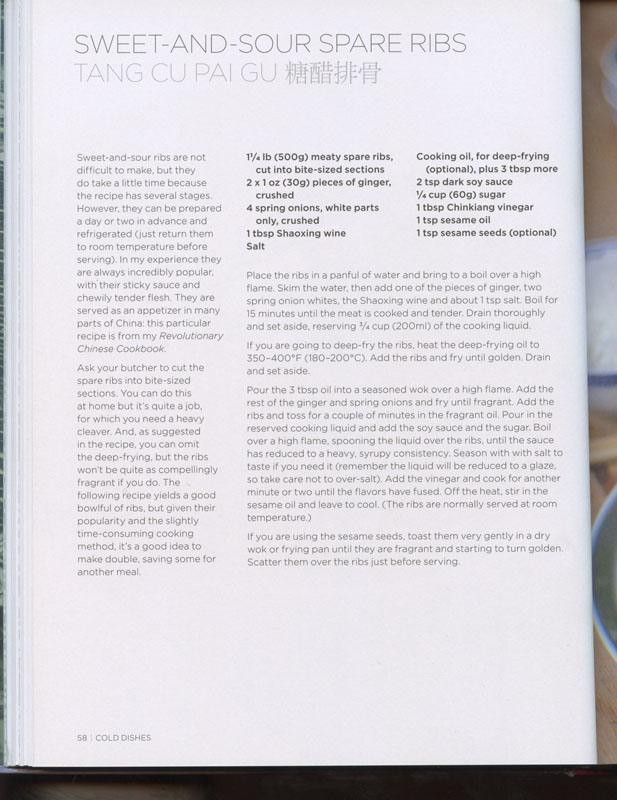 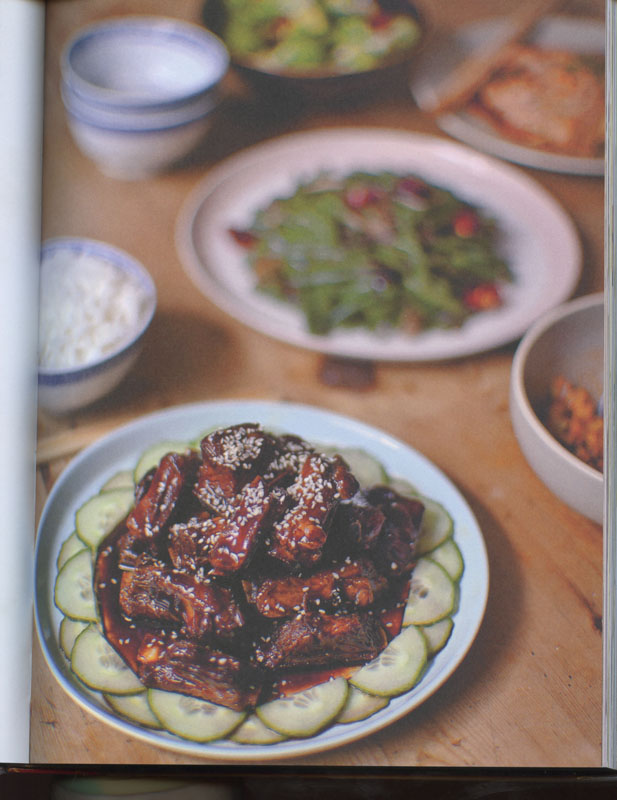