It was wonderful being in China again, visiting familiar and unfamiliar places - and tasting some wonderful food. Travelling the length and breadth of the country with Ken and the film crew, I realised just how vast China is; it could swallow Europe, and some of its cities boast as many inhabitants as a single European country. Although there are shared threads, there really is no such thing as ‘Chinese cuisine’: the cooking styles of China’s regions - influenced variously by geography, climate and history - are as different as those of countries in northern and southern Europe.

Food has such a central role in Chinese culture that, country-wide, one of the most common greetings translates as: 'Have you eaten yet?’ I like that! Formally, there are eight distinctive regional cuisines (Shandong, Sichuan, Guangdong, Fujian, Jiangsu, Zhejiang, Hunan and Anhui). Many commentators, however, divide the country into gastronomic quarters: Beijing and the north, Shanghai and the east, Sichuan and the west, Guangzhou (Canton) and the south. But even these simpler divisions do not take into account further variations: Chinese Muslims and Buddhists have their individual styles of cooking, as do the minority ethnic groups - some 56 of them - that co-exist with the majority Han Chinese. But cooking and eating with the Dai minority and the Bulang tea-pickers was a delight for me in Yunnan, and experiencing Muslim food with the Uighurs in Kashgar, in the far north, was an eye-opener- as were the hats!

Whichever region they come from, Han Chinese all comply with the principle of balance denoted by yin and yang. In a culinary sense, yin means ‘cool’ and yang ‘hot’, and there are cooking techniques and ingredients that belong in each of the two camps. By cooking and eating in this balanced way, the Chinese believe an essential equilibrium is maintained, which ensures good health. Some restaurants cook with these principles in mind, and shops sell herbs that can be added to food. Some foods themselves are meant to be good for certain parts of the body: snake, for instance, is believed to be an aphrodisiac. Food as medicine wasn’t a new concept to me, but I got valuable further insights through many of the people we talked to. And although they’re said to be warming for the blood and good for the skin, I don’t think I’ll be eating fried scorpions any time soon - although Ken seemed to take a liking to them at a street-food stall in Wangfujing in Beijing...

Other shared threads of Chinese cooking are the balancing of the characteristics of a Chinese meal. Dishes should have fragrance, taste (sour, sweet, salty, bitter, piquant), shape, colour and mouth-feel: the latter subdivides into textural tenderness, crunchiness, crispiness, smoothness and softness (and explains why the Chinese have such a love for things like chicken feet). Another facet of Chinese eating is the love of snacks: from the xiao chi (small eats) of Sichuan to the dim sum of Hong Kong. Now, of course, with China having opened up to Western ideas and Western foods, some of these snacks might just be hamburgers, cheese or pizzas, which is worrying. The Chinese are already starting to suffer from Western health problems such as obesity, and if this continues, their historical reverence for food, its traditions and its role in Chinese culture might be eroding. This would be such a pity for, even though I am Taiwanese, I am full of admiration for my mainland neighbours - supposed ‘opponents/adversaries’ - for their fortitude, for their culinary creativity, and for the history that we share.

I don’t think there could have been a better time to explore China than when we went, at the beginning of 2012. The real China still exists, thank goodness, even though westernisation and relentless progress are nibbling away at the old traditional ways of doing things, of cooking food, of eating, of thinking, of living. We travelled from the wild frontiers of the north to the industrial megacities of the south and saw the inevitable conflicts between tradition and modernity, between communism and capitalism. But we also talked to the ‘real’ people who inhabit the country and their pragmatism gives me great hope for the survival of the ‘real’ China - although it won’t be an easy task.

China now has a population of nearly 1.4 billion, which represents some 20 per cent of the world population (and means that approximately one person in five is Chinese). China is trying to feed that 20 per cent of world population with less than 10 per cent of the planet’s arable land. But some 10 per cent of China’s arable land - the land on which food grows - has been lost to development in the last ten years or so. As farmers move to the cities, either forced by expropriation of their land or lured by the promise of a better life, one wonders how the food supply can be maintained. If the cities are growing in size, and the farming land is diminishing, how on earth are the Chinese going to manage to feed themselves? They have always been clever about utilising the most unlikely space to produce food - I’m thinking of rice terraces snaking up hillsides, especially in Yunnan, the ’peri-urban’ plots of greenery grown at city roadsides and in public gardens, fish in paddyfields, turtle ponds, aquaculture in general. However, with less land on which to produce the staples - rice in the south, wheat in the north - the traditional Chinese mode of eating may have to radically change.

In a sense it already has, with the influx of Western-type foods and food chains. Meat is now seen as a necessary part of the diet when, previously, it was a rare treat, more of a flavouring for vegetables. (Meat dishes in Western Chinese restaurants are uncharacteristic of real Chinese cooking.) Where and how will all the meat-producing animals be raised? Dairy farming has recently been encouraged by the government, although over 90 per cent of the adult population is lactose intolerant to a certain degree. Where and how will all the milk-producing animals be raised? As China gets richer, and with a burgeoning middle class, will women be happy to spend hours making wontons and dumplings, or will they start to buy them ready-made? And, most frighteningly, if young Chinese take to the hamburgers and pizzas now being introduced, will the next generation actually know how to cook their own traditional dishes ?

However, in our travels around China, we encountered eaters, thinkers, cooks and producers and all were incredibly enthusiastic about what they were doing. They all intend to hold on to what they value from the past, but perhaps - rather like Ching and I - would probably choose to ally it with a hint of the new. Hong Kong, for instance, is the showcase for a balance between the old and traditional and the new and progressive, certainly in terms of food, so perhaps this is the way China will go. The Chinese have survived much worse, re-emerging from chaos, and I think they can do so again. I sincerely hope so. 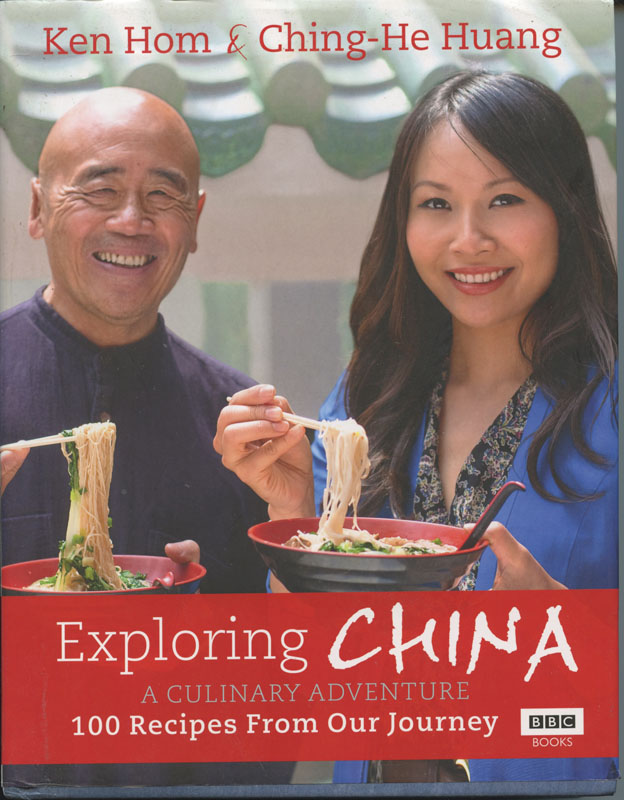 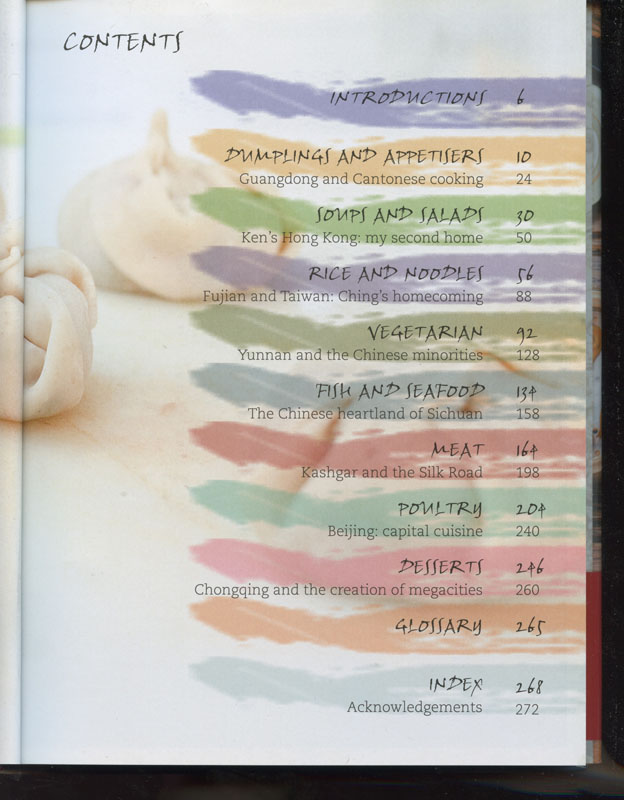 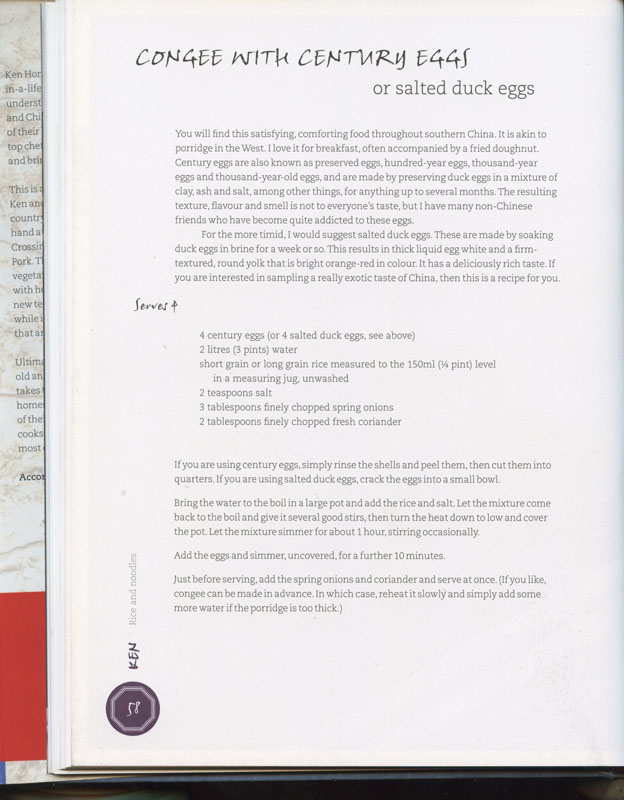 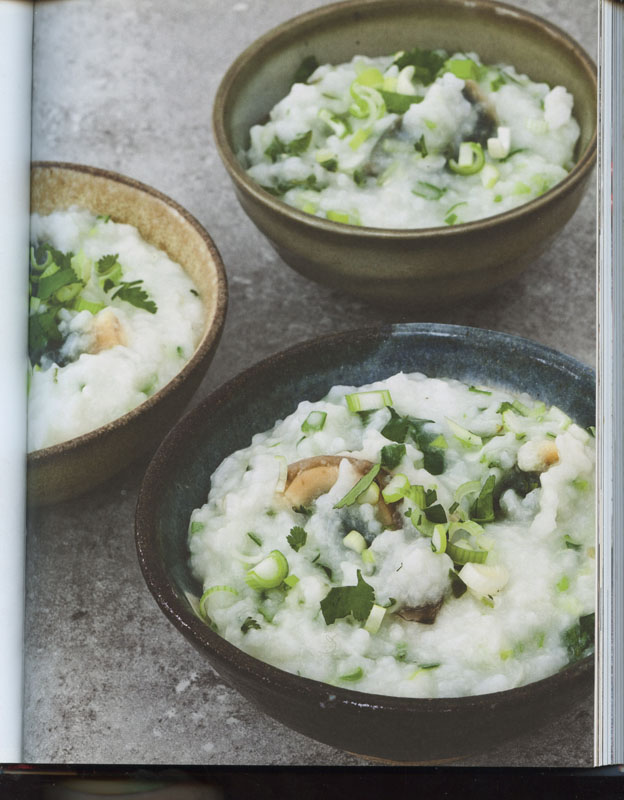